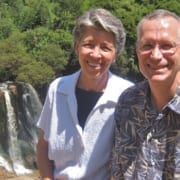 In 2008, on the plane ride home from Kenya, Steve and Alene Burgert concluded together than God was calling them to full-time mission service at Tenwek Hospital. Just two years earlier, Steve had believed that his area of medical expertise – gastroenterology – wasn’t needed in the mission field because of the highly specialized equipment required. However, a colleague told him about Tenwek and after their first month-long service mission in 2006, Steve felt he had fulfilled his “duty.”

The unmistakable call came during their second short-term visit to the hospital – and they haven’t looked back.

The Burgert’s second trip occurred during a period of post-election violence and turmoil in Kenya. “It was an extremely stressful time for everyone, but we were impressed with the Christ-centered focus of the missionaries and nationals at Tenwek through those challenges,” recalls Alene. “We also experienced the Lord’s presence and faithfulness in ways that we never had before. We both grew spiritually during that time, and felt drawn to pursue a direction which would require developing even more trust in the Lord – and Kenya seemed to be the new direction that the Lord was showing us.”

Today, as Tenwek’s Director of Endoscopy Services, Steve provides direct patient care, trains Kenyan interns and residents, conducts GI tract malignancy research, and disciples his department staff. Kenya has an extremely high rate of esophageal and gastric cancers; hospital staff performs over 2,000 endoscopies each year and insert more than 300 esophageal stents annually for palliation of inoperable esophageal cancer. These allow patients to eat and swallow, prolonging and improving their lives for months to years. It would not be an exaggeration to say that during his tenure at Tenwek, Steve has treated more people with esophageal cancer than anyone else in Africa!

Though Alene had been a full-time prison chaplain employed by the State of Colorado Department of Corrections, she was not sure what her work in Kenya would be. But when she was asked by the pastor in charge of Tenwek’s School of Chaplaincy if she would teach a class on prison ministry, she knew God had revealed His plan. After discovering that only one pastor – from a town two hours away – was visiting area prisons, Alene saw the need to work with him to develop a correctional ministry.

What began as initial, tentative prison visits gained miraculous momentum. Though faced with many hurdles, Alene, the School of Chaplaincy, and surrounding churches have formed the Correctional Ministry of Kenya. The ten Kenyan chaplains all have a connection with Tenwek –seven were trained at the School of Chaplaincy and three were trained by graduates. They have visited over 30 men’s and women’s prisons in Western Kenya and hold weekly discipleship programs in 15 prisons.

Sharing the gospel with the prisoners has transformed prisoner conduct in such a dramatic way that prison officers and administrators have become the biggest advocates of the program. National officials in Nairobi have heard of this impact in prisons in Western Kenya have asked if the Correctional Ministry can be expanded to more prisons in Kenya.

Steve and Alene are guided by the admonition in 1Peter 4:10: Each one should use whatever gift he has received to serve others, faithfully administering God’s grace in its various forms.

“It is a joy to see endoscopy team members sharing the gospel of Jesus Christ and Bibles with patients and their families,” says Steve. “It is a blessing to see more and more trained endoscopists as we continue to strive to have national Kenyans assume more of our responsibilities as we ‘work ourselves out of a job’! Our faith continues to deepen as we witness the Lord’s faithfulness and provision for advancing His kingdom.”