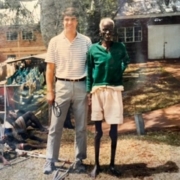 “I was looking for an opportunity to serve,” Dr. Van Os said. “I applied to World Medical Mission, and I told them to just send me wherever they needed me, and they sent me to this place called Tenwek Hospital, which was completely unknown to me.”

That first visit, a three-month trip in 1988 as a new Christian having just finished his internal medicine residency in San Antonio, left quite a mark on the young doctor. Working as a general medical officer, Dr. Van Os did basically everything but surgery, including caring for patients in the emergency room and maternity ward.

The graduate of the University of Texas Southwestern Medical School has been back to Tenwek three times since then. 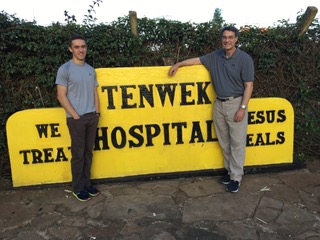 He returned for a three-week visit in 2015 with his wife, Nancy, and three children, Andrew, Peter and Elizabeth. In 2018, he went back for another three-week stint, this time with just Peter. Last year, he spent six weeks at Tenwek with Nancy, returning to their home of Colorado Springs in November.

And while many people, experiences and events at Tenwek over the years have left an impression on Dr. Van Os, one person in particular has stood out: Dr. Ernie Steury.

“I have to say my greatest memory is probably my first trip, because I had the great honor and privilege of working with Dr. Ernie Steury directly,” Dr. Van Os said. “He was the most godly, Christlike person I’ve ever met; unbelievably self-sacrificing. He’s really served as an inspiration and role model to me for the rest of my life.”

Dr. Van Os remembers a particularly impactful case during his first trip to the hospital in ’88, a situation that showed the character of Dr. Steury.

One night, a man came to the hospital with a severe head wound. Appearing disheveled and lethargic, Dr. Van Os and the other emergency room personnel assumed he was drunk. However, rather than sobering up as time went on, the patient became more sluggish.

“He was herniating in his brainstem,” Dr. Van Os said. “I thought we had to let him go – there was no intensive care unit at that time in Tenwek.” 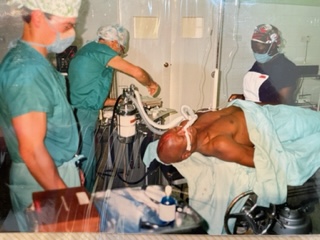 Just to be safe, Dr. Van Os called Dr. Steury to update him on the situation. Dr. Steury was not on call for emergencies. To his surprise, Dr. Steury jumped to action as he had done so many times in his career.

“Shave his head and bring him down to the operating room,” Dr. Van Os remembers Dr. Steury saying. “I’ll meet you there.”

Although Dr. Steury wasn’t on duty at the time, he operated on the sick man anyway, flushing the large clot that had formed on his brain in order to save his life. 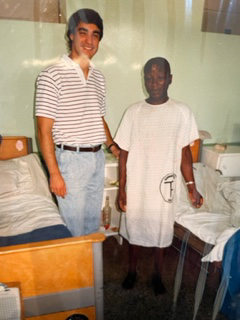 “I have a picture standing next to the guy two days later,” Dr. Van Os said. “A dramatic case and just highlights the versatility and skill of Dr. Steury.”

Throughout his experiences at Tenwek, Dr. Van Os has seen a common thread tying his patients together: one of humility, resolve and grace.

“Some are pretty destitute,” Dr. Van Os said. “Many patients don’t read or write – they’ll sign consent forms with a thumb print. Some don’t speak Swahili. Some don’t have shoes. They may not have more than one or two sets of clothing. It’s really humbling and really a privilege to be able to care for them.”

A few particular patients from his most recent trip represented this distinct persona.

One was a jaundiced woman with pancreatic cancer and an obstructed bile duct, who Dr. Van Os stented in order to drain her liver and resolve the jaundice.

There was also a patient who needed a bile duct stone removed and a woman with bad pancreatitis who needed stenting.

Finally, there was a seven-year-old boy who had inadvertently swallowed sulfuric acid and was suffering from severe damage to his esophagus.

“If you don’t get to that quickly, your esophagus can stricture shut and become nonfunctional,” Dr. Van Os said.

While he doesn’t see patients less than 17 years old in the United States, Dr. Van Os operated on the boy anyway and was able to dilate his esophagus to prevent it from permanently closing. This procedure was done in collaboration with his Kenyan colleagues. Their experience is invaluable in these situations and the teamwork is wonderful.

Dr. Van Os notes that many of these success stories have been made possible by Tenwek’s state-of-the-art support network.

“Tenwek is certainly an advanced hospital by mission hospital standards,” he said. “They’re really pushing the envelope in a lot of areas.” 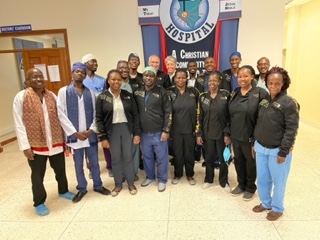 One notable technology that Tenwek offers to its patients is ERCP (endoscopic retrograde cholangiopancreatography), a diagnostic technique used by trained gastroenterologists (like Dr. Van Os, who stayed an extra year during his fellowship at the Mayo Clinic to be trained in this technique).

“That’s a very advanced procedure,” Dr. Van Os said. “There are many hospitals in America that don’t do ERCP. It’s nice to be able to offer that to patients at a rural hospital.”

And while Dr. Van Os has been touched by the patients he’s treated at Tenwek, he’s also been inspired by the long-term missionaries he’s served alongside. 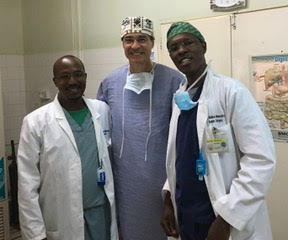 “They’ve left behind the opportunity to be quite wealthy and successful. They’ve forsaken that for a higher calling — to be obedient to Christ and to minister his name to the needs of people in Africa.”

Dr. Van Os is also impressed by the flexibility of Tenwek missionaries, the same type of flexibility he was forced to demonstrate when operating on the seven-year-old during his last visit. 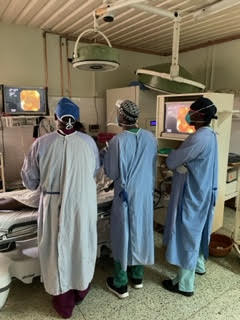 “I’m inspired medically by the career missionary doctors, because they’re often faced with having to do things that they weren’t specifically trained to do,” Dr. Van Os said. “It takes courage and ingenuity to try to do something for a patient that you don’t have a lot of experience with – but the patients don’t have any other options.” 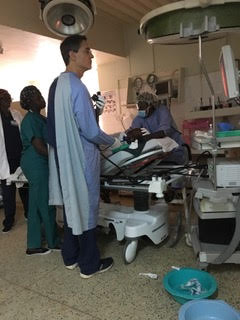 After retiring from practice in Colorado Springs this year, Dr. Van Os is looking forward to spending more of his time at Tenwek and places like it with Nancy, who, as an experienced seamstress, has enjoyed involvement with Threads of Hope. As he prepares for a new phase of his life, one centered on mission work, Dr. Van Os eagerly awaits the opportunities to practice medicine with the perspective he learned at Tenwek back in 1988.

“My experience back in the 80’s, I have been able to carry with me, and it really helped me to get my priorities right,” Dr. Van Os said. “I would just say when you get over to Tenwek, it’s very, very refreshing, because you’re reminded of and confronted with the reason you went into medicine in the first place – it’s focus on the pure joy of practicing medicine.” 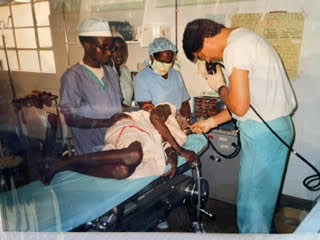