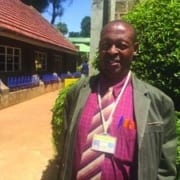 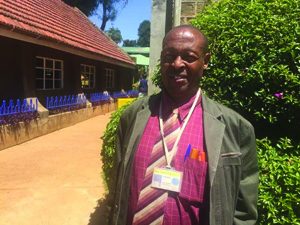 For most of his life, Rev. David Kilel has been devoted to the spiritual needs of Tenwek’s patients and their families. He was the hospital’s first full-time chaplain, serving for many years alongside Dr. Ernie Steury, the tireless physician who grew a rural clinic into one of the world’s premier mission hospitals.

Today, Rev. Kilel is the director of The Tenwek Hospital International School of Chaplaincy. As he looks ahead to passing on the leadership baton, he is as excited as ever by the possibilities he sees for the Gospel to be preached by trained chaplains throughout Kenya and across Africa.

He grew up about 30 kilometers from Tenwek and was just eight years old when he first heard the Gospel. After attending high school, Rev. Kilel thought about joining the army, “but the Lord said ‘no’,” he recalls. Instead, he remembers the exact time and date – Wednesday, April 24, 1971 at 4 p.m. – “when the Lord called me to Kenya Highlands Bible College. People from my church each gave one to five schillings to help pay for one year of school.” Janitorial work and more support from a school principal prompted by God helped pay for the rest of his education.

In 1975, the Africa Gospel Church appointed Rev. Kilel as the hospital’s full-time chaplain and he met Dr. Steury, who became a close mentor and friend. Together, the two men agreed that no patient would ever leave Tenwek Hospital without hearing about Jesus. They also shared a vision for establishing a school that would train men and women how to serve as chaplains “at the bedside and beyond.”

The dream was nurtured through the years, even as Rev. Kilel led chapel services and staff devotionals, preached and planted churches, and trained a growing staff how to follow-up and visit the Tenwek patients and family members who were being saved every week, everywhere. Serving alongside him is his wife, Esther, who has led the women’s ministry for eight local churches. The Kilel’s have two sons and two daughters.

In 1989, Rev. Kilel graduated from the Nairobi Evangelical Graduate School of Theology. In 1991, the dream he shared with Dr. Steury became a reality. With some early funding provided by Samaritan’s Purse, Tenwek Hospital L. Nelson Bell Chaplaincy School became first school of its kind in Kenya, focused not only on biblical training, but also ministering to the whole person and helping people through sickness and bereavement. The program expanded its scope of training so that graduates of the chaplaincy program are prepared to work in various settings including hospitals, schools, colleges, prisons, and the armed forces. Nearly 200 chaplains from more than 10 African nations have graduated from the school.

Rev. Dean Cowles, FOT Field Director, helped Rev. Kilel open the school when Dean and his wife, Dr. Cheryl Cowles, first served at Tenwek. “Rev. Kilel pioneered the work of hospital chaplaincy in Kenya and much of Africa. In addition to starting many churches, he has been a mentor to hundreds of pastors and church leaders over the years,” notes Dean.

After four decades of service and preparing to retire, Rev. Kilel is not a man to rest on his accomplishments. The need, he believes, is greater than ever. FOT funds are supporting a team of academic consultants who are currently restructuring the curriculum. Rev. Kilel has prayed often over a piece of land adjacent to Tenwek where he envisions the construction of a spacious new school – a blessed training ground for many more students from across Africa in the years to come.

Because these cookies are strictly necessary to deliver the website, refuseing them will have impact how our site functions. You always can block or delete cookies by changing your browser settings and force blocking all cookies on this website. But this will always prompt you to accept/refuse cookies when revisiting our site.