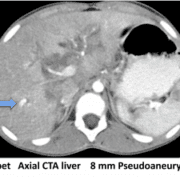 When FOT helped Tenwek purchase and install a 4-slice Toshiba CT scanner in 2011, it was the only such diagnostic machine within a three-hour drive of the hospital – and it was the beginning of a new era of diagnostic radiology at Tenwek Hospital.

FOT’s Radiology Champion, Read Vaughan, M.D., was one of only two visiting radiologists at that time. The advent of CT scanning brought a critical need for more radiologist support. In response, Read launched a recruitment campaign that has had impressive results.

Today, Tenwek’s Radiology Department performs over 3,500 CT scans annually. Readings are done by visiting radiologists who work on-site for 30-34 weeks each year. For the remaining weeks, scans are read by 36 volunteer radiologists across the U.S. and Canada, using a cloud-based teleradiology system called Nucleus.

Most recently, the need to replace the antiquated Toshiba CT scanner and its exorbitant maintenance contract became a priority. FOT provided $50,000 towards the $350,000 purchase price and offered an interest-free loan of $150,000 to the hospital to facilitate acquisition of a new 64-slice Siemens Go Up CT scanner. It brings CT angiography and other essential capabilities to Tenwek and supports the hospital’s new services in Neuroradiology and Pediatric Surgery. 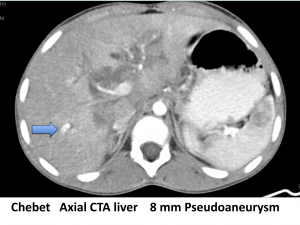 Peris Chebet is a 14-year-old Kenyan girl who presented at Tenwek with life threatening bleeding from her gastrointestinal track. An ultrasound showed her gallbladder full of clotted blood; an endoscopy confirmed that she was bleeding from inside her liver.

To perform the life-saving surgery Peris required, surgeons needed to know where the bleed inside her liver was originating. Prior to the installation of Tenwek’s new CT scanner, there was no way to provide this crucial information. But thanks to the new high-resolution machine, physicians were able to order a CT Angiogram of Peris’ abdomen which allowed radiologists to precisely identify a pseudoaneurysm in the right lobe of her liver.

Pediatric surgeon Michael Gainey and Tenwek surgeon Justus Lando were able to successfully block the artery and stop the bleeding. Six days later, Peris used the hand that had been extended for help from beneath her surgical drapes to wave a grateful goodbye as she went home from Tenwek. Her message to the doctors and donors who saved her: “This hand thanks you for its life!”