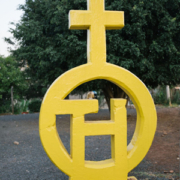 Amos and his father

Despite critical injuries sustained after falling from a truck, seventeen-year-old Amos had a chance at survival. His path to healing was a life-saving technique known as ECMO. But there were no reports of the procedure being available in Kenya.

Doctors at Tenwek’s Casualty Department had already inserted a chest tube into his left lung. More was needed to save his life though, after the major bronchial tubes in his right lung ruptured. Amos was rushed into the operating room, where a team led by Dr. Arega Fekadu Leta, a graduate of Tenwek’s Cardiothoracic Fellowship program, removed two-thirds of Amos’ badly injured right lung and repaired the leaks in his airways.

But the remaining upper lobes of both lungs were too damaged to sufficiently facilitate breathing. As the surgical team watched Amos’ oxygen level plummet, it became clear that Extracorporeal Membrane Oxygenation (ECMO) was his only chance at survival. Fairly common in tertiary care facilities in the United States, ECMO is essentially a temporary substitute for failing lungs.

By God’s providence, Dr. Hale Wills, a visiting pediatric surgeon with expertise in ECMO, was in the operating room that morning. So was long-term missionary Bob Groom, a perfusionist and ECMO specialist who had recently brought to Tenwek the components needed to build an ECMO circuit. After a rapid assessment of Amos’ situation and a pause for prayer, the surgical team began the venovenous ECMO procedure. Blood was withdrawn from Amos’ femoral vein and pumped through an artificial lung for oxygenation and carbon dioxide removal. The oxygen-rich blood was then returned downstream into his circulatory system near the heart.

Almost immediately, Amos’ blood oxygen levels returned to normal levels and the high blood lactate level caused by the period of low oxygen was corrected. The ventilator settings were adjusted to reduce the strain on his damaged lungs. After 91 long hours of support, Amos’ recovered lungs were gradually allowed to resume their life sustaining respiratory function. Within a few days, the breathing tube was removed from his trachea and his unassisted breathing was sufficient.

Reflecting on the experience, Bob noted, “If someone had asked me, I would have said maybe in three to five years we might have ECMO support available at Tenwek Hospital. But God had another plan and brought together everything that was needed in terms of supplies and expertise to save Amos’ life that day.”

We treat, Jesus heals – Tenwek’s mission endures. We give thanks and praise to the One who is able to do exceedingly and abundantly more than we could ever ask or think!