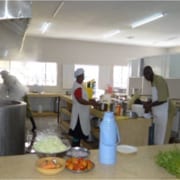 The immediate and overwhelming generosity of FOT donors in response to the February 2018 fire at Tenwek Hospital has accelerated the hospital’s recovery from the devastating event. FOT quickly raised funds to meet immediate needs in the aftermath of the fire, including the relocation of essential services and repairs to the damaged building and surrounding areas. Gift totaling more than $231,000, received from over 200 donors worldwide, continue to support Tenwek’s recovery and rebuilding efforts.

In addition to damage in the hospital’s kitchen, laundry, sterilization, Wound Care, and statistics areas, the fire revealed other vulnerabilities. These included the absence of a fire-fighting system on the hospital campus and lack of mobile transport to move patients safely across campus. If not for the quick and courageous work of volunteers, the fire could have spread rapidly.

With recovery efforts underway, additional FOT funds have helped rebuild the hospital kitchen, supported repairs and construction in other key areas, enabled the purchase of an ambulance, and aided with the installation of an on-site fire suppression system.  The new system includes a hose reel system and emergency pump designed to activate 18 high-pressure water hydrants located on the main hospital campus. 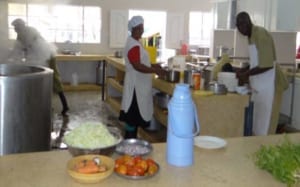 At left: The restored kitchen.

The damaged building was dedicated in 1997 to Sue Steury, who served at Tenwek for 38 years alongside her husband, Dr. Ernie Steury, the hospital’s first physician. The redesigned facility, which is being strategically reconstructed to house additional clinical and support services, will be called the Sue Steury Building.

According to Tenwek Hospital CEO Geoffrey Langat, the fire “could have been a disaster, but it was a blessing. “I see God’s blessing to Tenwek through FOT. They are true friends and true partners who are there in times of need.”